The Princess and the Pirate

Home/Tag: The Princess and the Pirate

Princess and the Pirate 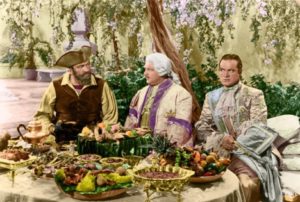 You wouldn’t know it from his later career, but there was a time when Bob Hope was genuinely funny. His movies in the 1940s followed a formula: stuck in a Hollywood genre film—Western, gangster, monster movie—Hope, a genial but cowardly shmoe, fouls up and gets in trouble with the bad guys. Trying to avoid whatever doom is at hand, he falls in with an Aspirational Blonde who’s also threatened by the creeps, and having to save her gives him the spine and spunk necessary to outwit the villains. In this entry, the villains are a crew of cartoonish Caribbean pirates led by a captain known as Hook because—do I have to tell you? Hope plays a comically-bad itinerant actor called Sylvester the Great, which gives him an excuse to adopt various guises over the course of the story (including, of course, a fop with a quizzing glass). The Aspirational Blonde is Margaret (Virginia Mayo, fittingly pale, bland, and cloying), who’s been abducted by the pirates and held for ransom because she’s actually the Princess of … somewhere, we’re never really told. Facts, meh: the story’s just a framework for a torrent of gags. The jokes start to get good when Walter Brennan shows up in the pirate crew, playing a crazy coot named Featherhead with unholy glee. He helps Sylvester and Margaret escape and sends them off on a cockamamie mission to dig up Hook’s buried treasure.

The escapees sail their dinghy to the pirate port of Casarouge, where after various mock-frightening encounters with the town’s scurvy citizens they run afoul of the colonial governor, the oleaginous La Roche, who’s played by the fine Austrian actor Walter Slezak, making his Hollywood debut in a comic rôle tinged with menace—his specialty. In fact, he made such a strong impression in this film that he spent the rest of the 1940s playing wily villains in historical adventures. Hook reappears and bellows a lot, Featherhead pops out of a wardrobe and tattoos a treasure map on Sylvester’s chest, Margaret sings a song, and there’s a good deal of chasing around the governor’s mansion. It’s pretty funny, actually, until the dumb deus-ex-machina ending invalidates all of Sylvester’s reluctant heroism. Walk the plank, writers.