Book Four of the Musketeers Cycle

By Alexandre Dumas, Edited and Translated by Lawrence Ellsworth 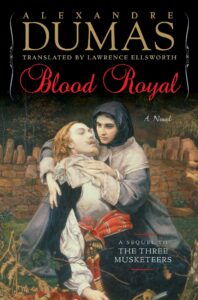 Blood Royal: Continuing the adventures during the English Civil War as d’Artagnan and the Three Musketeers attempt to save King Charles I from execution, only to run afoul of the mad vengeance of Mordaunt, the son of Milady de Winter!

As a successful playwright, Dumas was well-known in Paris by 1840, so he’d tasted celebrity, but his 1844 novel The Three Musketeers was a global phenomenon. His fame was suddenly worldwide, readers clamored for a sequel, and Dumas gave it to them in 1845 with Twenty Years After, a sprawling historical drama bigger even than The Three Musketeers—too large, in fact, for single-volume publication except in oversized editions or with tiny type between narrow margins.

The sequel was also unexpected in that it didn’t pick up right where Musketeers had left off (Dumas saved that approach for The Red Sphinx), but instead carried d’Artagnan and his comrades from youth into maturity—Twenty Years After, as the title promised. For Dumas had much bigger plans for his best-beloved characters than just giving them further adventures. By that time he was himself over forty, and wanted to show how his four varying archetypal heroes came to grips with the challenges of aging and the complexities of responsibility, while still finding ways to be true to themselves and their codes of honor and morality. To do this he worked out the plan of his four musketeers’ entire lives from the 1620s through the late 1660s, interweaving, clashing, separating and rejoining, defining them through what today we call long character arcs. And he involved them with a huge ensemble cast of secondary characters historical and fictional whose lives intertwined with theirs. He plotted a grand tale that would run to over a million words through the course of two giant sequels, the enormous Twenty Years After and the even more titanic Le Vicomte de Bragelonne.

This grand tale appeared in serial form, chapter after chapter, in Parisian periodicals from 1845 to 1850, and then was collected into books that were nearly always published in multiple volumes—especially in translation, where the sequels appeared in anywhere from four to eight parts. Your current editor has decided the saga divides most comfortably into six volumes, with Twenty Years After split in half; this book, Blood Royal, is the second volume of what Dumas originally published as Twenty Years After.

In this volume we see the shape of a new d’Artagnan start to emerge, as he faces his shortcomings in Twenty Years After and begins to adapt to the many-layered challenges of maturity. It helps that, though d’Artagnan has always been bold and clever, he has another core attribute that now comes to the fore: he is persistent. He tries new ideas, different approaches. And over the course of the story, he faces the reality that to prevail in this new world of complexity and compromise, he must grapple with moral ambiguity. To defeat his new enemies, he must adapt to their dubious methods—and sometimes even adopt them himself.

It is a considerable irony that d’Artagnan will be repeatedly forestalled by the much-younger Mordaunt, who comes out of the past of The Three Musketeers to embody the strengths of audacity and cunning that were once d’Artagnan’s hallmarks. Mordaunt, burning with the fire of vengeance, has usurped and corrupted those youthful strengths, and the older d’Artagnan is no match for him until he finally pulls his former team back together. To weld that team into a unit and wield it as a weapon, he must give up his exclusive reliance on the forthright methods of youth and add to them the tools of maturity: foresight, compromise, dissimulation, and even manipulation of his own allies. He will have to become a true leader of men, leading not just by example but also by persuasion, influencing others by understanding their motivations. Once he accepts this, the team can be re-formed, and they can defeat the specter of their past.

That accomplished, the musketeers must then wrestle with an even greater threat, the eternal nemesis of youthful heroism—politics. As we’ll see, though still and always a man of action when action is called for, d’Artagnan grows and evolves to become what he once despised: a politician.

And politics is a skill he will need as the saga continues into the future, for when Louis XIV comes into his power, d’Artagnan will have to learn to navigate the treacherous perils of the Court of the Sun King. Here in Blood Royal Dumas introduces the themes and characters that will be central to the story arc to follow, in the four final volumes of the Musketeers Cycle. Here we meet Raoul de Bragelonne, the son of Athos and heir to the traditions of chivalry; young Louis XIV, not yet the king in fact, who will embody the new regime of absolute monarchy; and Louise de La Vallière, whom both Raoul and Louis will love in a romance that will prove a defining metaphor for the new era. There’s little romance in Blood Royal, a lack Dumas admittedly regretted, but it firmly establishes the context for the affairs of the heart that will drive the adventures to come, in which love, politics, and power play essential roles in the great drama Dumas mounts on the stage of history.