A Two-Volume Parallel Novel to The Three Musketeers 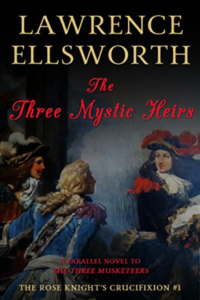 The Rose Knight’s Crucifixion: A Novel of Historical Adventure and a Romance of Ideas stands on its own, but it’s also a parallel novel to Alexandre Dumas’s The Three Musketeers. It shares certain characters and plot elements with Dumas’s classic work, the story of Louis d’Astarac interweaving with that of d’Artagnan, Athos, Porthos, and Aramis.

In 1619, the secret magic of the Rosicrucian Brotherhood was compiled into The Three Mystic Heirs, a forbidden book entirely obliterated by the Inquisition—except for one copy! And Louis d’Astarac thinks he knows how to find it.

Louis is a young French noble, witty, cultured, and independent—but he’s a hunchback, stunted and deformed. Rejected by his lady-love Isabeau, the desperate Louis decides his only hope is to cure his condition using the spiritual alchemy of the Rosicrucians. He must have that book!

The trail of the lost tome leads Louis to Paris, to meet a young scholar named René Descartes—and to an encounter with bloody murder. For the power of the Rosicrucian secrets is said to be great beyond measure, and the high and mighty of Europe are all determined to get it. Louis becomes a player in a fast-moving game of intrigue between the agents of England’s Duke of Buckingham, France’s Cardinal Richelieu, the Jesuit Order of Rome … and the shadowy Rosicrucians themselves. Along the way he gains loyal comrades in d’Artagnan and the Three Musketeers but makes dangerous enemies among the likes of the sinister Comte de Rochefort, the Jesuit agent known as Père Míkmaq, and the seductive and deadly Milady de Winter.

Volume 2: The Three Monks of Tears

The trail of the lost tome leads to Paris, where Louis crosses paths with d’Artagnan and the Three Musketeers, and becomes a player in a fast-moving game of intrigue between agents of England’s Duke of Buckingham, France’s Cardinal Richelieu, the Jesuit Order of Rome, and the shadowy Rosicrucians themselves. When Louis is betrayed by his own hired rogue, Cocodril, and runs afoul of the deadly Milady de Winter, he suddenly finds that nowhere in Paris is safe, not even among the King’s Musketeers!

In the fast-paced conclusion of The Three Monks of Tears, Louis must find dangerous new allies in the depths of the Parisian underground—and he must move quickly, because his beloved Isabeau is in the hands of his enemies. To win through, Louis d’Astarac will have to find hidden strengths he never knew he possessed.