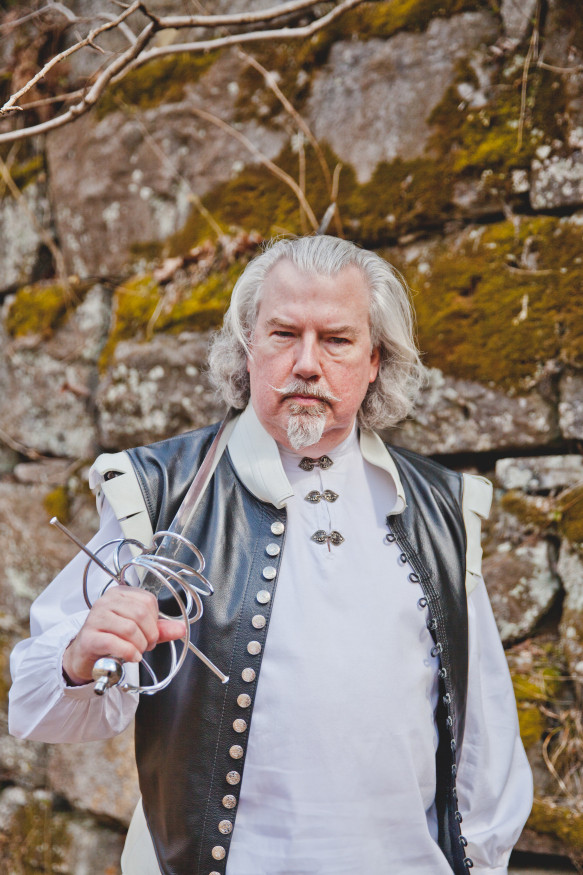 Lawrence Ellsworth is the pen name of Lawrence Schick. He began his career as a writer at TSR Hobbies in the late 1970s, where he wrote, developed, and edited a number of titles for the role-playing game Dungeons & Dragons. He produced role-playing scenarios and magazine articles throughout the 1980s, culminating in the publication of Heroic Worlds: A History and Guide to Role-Playing Games (Prometheus Books, 1991, as by Lawrence Schick).

When Ellsworth’s father was a young man in the 1930s and ’40s he was a fan of the adventure pulp magazines. When Ellsworth himself was a boy in the 1960s, publishers were reprinting many of the best pulp tales in inexpensive paperbacks, and his father would buy them, read them, and then pass them on to his son. Thus, Harold Lamb, Edgar Rice Burroughs, and Robert E. Howard enthralled Ellsworth at an early age. Poring through the libraries for any book in which the hero wore a sword soon led him to Dumas, Sabatini, Orczy, Tolkien, H. Rider Haggard, and Arthur Conan Doyle’s historicals. Ellsworth wallowed in swashbucklers.

In the early 1970s, just as he was beginning to think the genre was played out, the Richard Lester / George MacDonald Fraser films The Three Musketeers and The Four Musketeers proved there were still new ways to approach it. The scripts led Ellsworth to Fraser’s Flashman novels, and that sealed the deal for good and all.

In the early 1990s Ellsworth led a troupe of writers who produced live-action role-playing weekends for 50 to 100 players, specializing in historical productions with romantic themes. While writing and researching The King’s Musketeers for this troupe, he became fascinated with early 17th-century France. This rekindled his interest in swashbuckler fiction, and he has since become a noted reviewer and authority on the subject.

Ellsworth learned French so he could read Dumas’s novels, and Richelieu’s memoirs, in the original language. In the process he did a translation of The Three Musketeers for fun and practice. This led him to compile a full translation and reconstruction of Alexandre Dumas’ “lost” novel The Red Sphinx, published in 2017. Its success led Ellsworth to take Dumas’s entire musketeers series in new, comprehensive editions.

Ellsworth has attended the Taos Writers’ Workshop (Historical Fiction program) and the Algonkian Writers’ Workshop. He is a member of the Historical Novel Society, attended the American HNS Conferences in 2005 and 2007, and was a featured speaker at the conference in 2019. He has written scripts for comic books, has worked in radio and narrative voiceovers, and is an experienced public speaker. He has three children, Wyatt, Sanderson, and Honor, and lives nowadays in Dublin, Ireland.