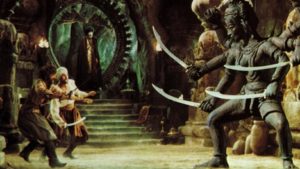 Golden Voyage is beloved by fantasy film fans for its fabulous creatures animated in stop-motion by Ray Harryhausen, but its hallmark monsters aside, this is one strange movie. The story is a sort of stately parade of wonders with a plot that makes sense only in the terms of dream logic. Sinbad (John Philip Law, bland but with a nice smile) happens upon one-third of a magical golden amulet, and thereafter is led by visions and visitations on a quest for … what? Some goal that, despite a superfluity of prophecies and portents, is never really clear. Wealth? Power? Experience points?

Maybe it’s the latter, because Sinbad and company are basically a Dungeons & Dragons adventure party, his crew reminiscent of the clichéd squad members in every war movie, only with Arabian Nights names like Haroun and Omar. They’re joined by Caroline Munro as Margiana because she’s the hottest thing in harem pants, and because she has an eye tattooed on her hand that Sinbad saw in a dream, so she must come along because Fate or something. The party is rounded out by a grand vizier who conceals his features behind a golden mask because they were destroyed by a fireball from the evil wizard Koura. This vizier joins the quest because somebody has to utter portentous warnings and explain What It All Means.

Which brings us to the aforementioned evil wizard Koura, and here’s where the movie gets interesting. This sorcerer, Sinbad’s arch-rival on the amulet quest, is played by Tom Baker—the Fourth Doctor!—who’s almost unrecognizable in a black turban and face kerchief. But he does more emoting with just his eyes than the rest of the cast put together. Koura is the wizard who magically animates all the creatures that bedevil Sinbad and company, but every time he casts a spell he visibly ages, marching toward death, and soon it becomes clear that he wants the magical amulet’s prize because it will restore his lost youth and stave off his suicide-by-sorcery. This makes Koura the only character in the picture with clear and comprehensible motives, and Baker plays him with such energy and verve that about halfway through the film I found myself starting to root for the villain.

Koura won me over in the scene where, with a mandrake root, alchemy, and a dollop of his own blood, he animates a tiny, winged homunculus, and suddenly we see that the putative villain is the real heart of this fantasy: passionate, he breathes life into inanimate matter, creating wonder before our eyes. Yes, you’ve got it: Koura is really Ray Harryhausen himself, literally pouring his life into his creations. This is even more clear when Koura animates a statue of the six-armed goddess Kali, making it dance for him purely so he can revel in his artistry—or rather Harryhausen’s artistry, for whether dancing or wielding six swords against Sinbad, the slyly smiling Kali is a masterpiece, so good it’s easy to forgive the stretches where the film falls flat.

The script is by Brian Clemens, the English screenwriter behind most of the best moments of the British Avengers TV show, but this outing is weak work, recycled adventure-film tropes and Orientalist clichés. The dialogue is studded with phony wise sayings like “You cannot pick up two melons with one hand,” in which you can hear the snotty British intellectual sneering at the Wisdom of the East. It’s embarrassing. Eventually the quest leads to the long-lost island of Lemuria, which is cluttered with ruins evoking every ancient Asian culture at once: India, Tibet, Cambodia, China, and so on. It’s meant to imply that the questers have discovered the source of all the cultures of the Mysterious East, but it feels more like the message is all those bally foreign temples look alike to me, eh, what what? It doesn’t help that the Lemurians, when they find them, are a tribe of green-skinned ooga-booga cannibals with skulls on sticks. Ouch.

But those animated monsters, though! So fabulous. Plus there’s some wonderfully lush music by Miklós Rósza, who contributed one of his last great film scores, and a couple of epic dungeon crawls that I guarantee helped inspire Gary Gygax. Despite its lapses and eccentricities, as fantasy films go, Golden Voyage is still almost indispensable. 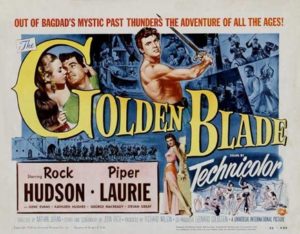 Every year for a while Universal popped out another of these quickie Arabian fantasies, further amortizing the costumes and sets they’d built for Arabian Nights in 1942. It’s a tribute to Piper Laurie that she managed to star in three of these things in succession and still go on to have a distinguished career in film. By this time Tony Curtis had left Bagdad for Camelot, so Universal roped in rising star Rock Hudson to play the male lead, Harun. The story is rudimentary: Harun’s father, the Sultan of Basra, is slain by mysterious assailants whom Harun tracks to Bagdad. There, in the same used-clothing shop, he encounters Khairuzan (Laurie), the incognito daughter of the caliph who likes to go slumming among the commoners, and a magical golden blade, the Sword of the Prophecy of the Destiny of Fate or something, that only exhibits its powers when wielded by Harun. This is never really explained, like at all, but that’s par for the course in this sloppy farrago. For example, Harun’s quest to avenge his father is conveniently forgotten for most of the picture, as he gets drawn by Khairuzan into improbable shenanigans at the caliph’s court. There’s a dumb palace conspiracy involving an evil vizier inevitably named Jafar (the always-reliable George Macready, looking embarrassed), his dim-witted and brutal son, a scheming noblewoman, a Greek merchant, giggling half-clad harem girls, and an endless supply of disposable palace guards.

Sounds like a total loss, right? Not quite: the bad guys wear scorpion medallions (you heard me: scorpion medallions!), Piper Laurie has got the Adorable turned up to eleven, and there’s one amazing, essential scene where Harun, at a palace party, gets totally stoned smoking whatever’s in that tall, pink hookah while watching an “Oriental” dancer undulate in front of him. In his hallucinatory state the dancer transforms into Khairuzan, and he pursues her weaving through an endless hall hung with filmy, fluttering salmon-pink curtains. Far out! I had to watch it twice. Meanwhile his magic golden blade is being stolen and replaced by an imitation, in a plot engineered by Jafar so his doofus son can win a tournament that … nah, never mind, it’s just too dumb to recount.

At least Hudson’s smarmy grin is wiped off his face for a while, as, without his magic sword, he becomes a sad-sack loser who can’t do anything right. The golden blade gets stuck in a marble pillar, and nobody can pull it out, not nohow, except for guess who? (Tony Curtis may have run off to Camelot, but he left Excalibur behind in Bagdad.) When Harun finally draws the magic blade everything wraps up double quick in a spasm of bloodless mayhem, and Harun is reunited with Khairuzan, who was only pretending to hate him. She has a nice smile.