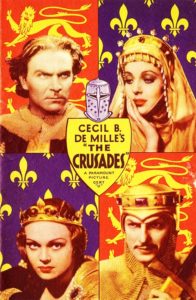 If you know only two names associated with the Crusades, they’ll be King Richard of England, known as the Lion-Heart, and Saladin of the Saracens, who in 1187 completed an Islamic conquest of the Holy Land. So when Cecil B. DeMille, who made big, crowd-pleasing films, set out to make his movie about the Crusades, he knew it had to be about those two characters. To his credit, he hired the great historical fiction author Harold Lamb as writer and researcher—but DeMille, who always played fast and loose with historical fact, used only the parts that suited the telling of his melodramatic story.

After Jerusalem falls to the Muslims, the Holy Hermit (played by C. Aubrey Smith and his whiskers) rouses the kings of Christendom to join in a Third Crusade to liberate the city. All the monarchs of Christian Europe, including Philip of France, sign up for the picnic. Philip’s sister, Princess Alice, is promised by treaty to marry King Richard, who is played by DeMille’s go-to leading man, Henry Wilcoxon, as a brave but thought-free manly lout who cares little for politics, women, or religion, but loves a good fight. In order to avoid wedding the surly Alice, Richard joins in with the Crusade and marches his army across France. But by the time he reaches the Mediterranean coast his men are starving, and he ends up marrying regardless to get his troops enough food and fodder to get them to Palestine. His new wife is Berengaria (Loretta Young), daughter of the King of Navarre, and gentle and well-meaning soul ill-matched to King Dudebro. Richard humiliates her, but she puts up with everything he does—“for the Crusade.”

This was a tremendously expensive film to make, and you can see every dollar on the screen: it looks great. Lamb did his research well, and this is the finest depiction of the pageantry and slaughter of the Crusades the first half of the twentieth century could offer. The battle scenes are spectacular and convincingly horrific. Unfortunately, what they’re surrounded with is sheer tripe, a lot of tiresome religious chest-beating, along with a ridiculous romantic soap opera that contrives a love triangle between Richard, Berengaria, and … Saladin. (Yes!) Surprisingly, Ian Keith’s portrayal of Saladin is the picture’s best performance, restrained yet powerful. But can it outweigh the wretched Alan Hale, Sr., as Richard’s “funny” minstrel, Blondel? Perhaps not.