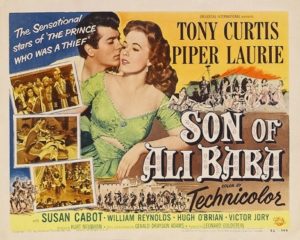 Universal decided to do another Arabian Nights-style adventure starring Tony Curtis and Piper Laurie, but this time around they got a dud. Thanks to his ex-thief father Ali’s vast wealth, Kashma Baba (Curtis) is enrolled with the sons of the nobility as a cadet in Bagdad’s Military Academy—which, except for the dark Curtis, is entirely filled with WASP-looking frat boys straight from the country club. (As usual, only merchants, thieves, and the caliph’s goons look like actual Persians or Arabs.) Kashma throws himself a rowdy birthday party in his opulent Bagdad house in which the caliph’s boorish son gets thrown into Kashma’s indoor pool. Uh oh! Vengeance is sworn, and the next morning Kashma is embroiled in a plot to ruin him and his father by foisting an escaped slave girl, Kiki (Laurie), upon him, only she’s really a princess who’s been promised to the shah unless she can find Ali Baba’s treasure for the caliph to save her mother but it’s impossible to care because this thing is a mess, okay?

I always hate to blame the writers, they’ve got it hard enough, but in this case I feel obliged to point the finger of shame at Gerald Drayson Adams, who concocted this goofy story and wrote all the terrible, terrible dialogue. There’s a definite high style to the classic Arabian Nights stories, and adapting that poetic diction to a movie script can be done, and well, but based on this clunker Adams had no idea how to do it. These poor actors are only human, and no one can say a line like, “I sense an evil hand has wrought this chain of circumstances!” without looking at least a little embarrassed. Poor Tony Curtis has it the worst, having to utter junk like, “Perished I would have, had not the princess dragged me from the flames,” all with a pronounced Noo Yawk accent. Yeesh. (“This is the palace of my fadda, and yonda is the Valley of the Sun” is actually from this film rather than the later Black Shield of Falworth.)

The only real point of interest in this otherwise dull and derivative exercise is the character of Tala (Susan Cabot), a bow-wielding huntress and friend of Kashma’s youth. At first it seems her only purpose is to make Princess Piper jealous of her connection to Kashma, but then she saves the day several times in succession with her deadly talents at archery. Tala is genuinely intriguing and capable, and how she wandered into this fiasco is anybody’s guess. The rôle should probably have been combined with the princess’s so Laurie would have something to do other than look ornamental, because as it stands, her considerable talents are wasted. Skip this one and watch The Prince who was a Thief a second time instead.