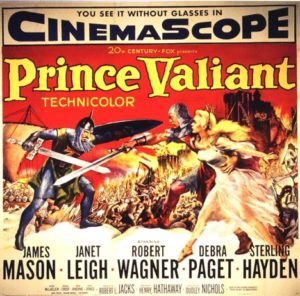 When I was a kid, Sunday morning meant the eagerly-awaited color comics section of the Akron Beacon Journal, and the comic I always turned to first was Prince Valiant. Hal Foster’s adventure tale, set “In the Days of King Arthur,” was gorgeously designed, told an endless story of nearly adult caliber, had engaging characters, was epic in scope and yet ambitious in its attempt to get the details of medieval life credible and accurate. (Its historical setting was highly fictitious, of course, but the Arthur tales are legend, not history.) Prince Valiant was arguably the greatest American adventure strip of the 20th century.

The movie adaptation is … not as great. It’s also not nearly as terrible as its reputation, which rests mainly on how doofy Robert Wagner looks in a black page-boy wig, and how badly miscast the talented Sterling Hayden is as Val’s mentor, Sir Gawain. The rest of the cast is quite good, led by James Mason as the treacherous Sir Brack and Janet Leigh as the feisty Aleta, backed up by Debra Paget as Princess Ilene and the ursine Victor McLaglen as Boltar the Viking. The direction by Henry Hathaway is solid, especially the action sequences, and Franz Waxman delivers his usual top-notch score.

So why is this movie so roundly sneered at? Its problems are twofold. First, it seems somebody thought that because it’s adapted from a comic strip, its tone needed to be juvenile, like a boy’s-own-adventure book with everything clichéd and obvious. Second, though there’s nothing more English than King Arthur and the Knights of the Round Table, there’s nobody more gosh-darned American than Sterling Hayden and Robert Wagner (unless it’s Tony Curtis, who almost got Wagner’s part). Every time they open their mouths, you hear New Jersey.

The first two-thirds of the movie are basically a standard Hollywood squire-learning-to-be-a-knight picture, though with even worse dialogue than usual. The only twist is that Val is a Viking prince from “Scandia” (clever, eh?), so there’s extra snobbery ‘cause he’s a northern barbarian. The flick briefly turns into a silly romantic farce when both Val and Gawain fall for Aleta, and for twenty cringe-worthy minutes the movie looks doomed—until James Mason saves the day by being a right evil scheming bastard.

Literally. Though illegitimate, Sir Brack has royal blood, and he’s been plotting to usurp Arthur’s throne. Brack’s cut a deal with the wicked Viking Sligon—the same brute who deposed Val’s father, which is why he sent Val to Camelot—a deal to lend Brack a Viking army in exchange for Prince Valiant, the last heir to Sligon’s stolen throne. Brack tricks Val into leaving Camelot, he’s captured and taken to Scandia ….

…And suddenly it’s like we’re in a whole different movie, an exciting action-adventure that’s not doofy at all. Val, his parents, and Aleta (who’d gone after him) are clapped by Sligon into a grim dungeon, set to be first tortured and then crucified. Boltar is outside rallying the loyal Vikings to attack Sligon’s castle and save them, but the effort is doomed without someone on the inside to change the odds. Val, locked in a dungeon cell with no way out, suddenly transforms into the bold and clever trickster of the comic strip—it’s like a switch got flipped. In a thrilling extended action sequence, Val escapes from his cell, signals the loyal Vikings to attack, drenches half of Sligon’s defenders in their own flaming whale oil, duels Sligon to the death for possession of his birthright, the Singing Sword, and frees his parents and Aleta before the burning fortress can collapse on top of them. It’s brilliant. After that, returning to Camelot to challenge Sir Brack to trial-by-combat seems almost an afterthought.