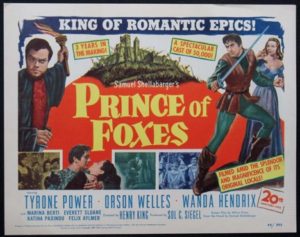 This, like Captain from Castile, is based on a novel by the popular American historical fiction author Samuel Shellabarger. It’s set in 1500 in northern Italy, where Cesare Borgia (Orson Welles!) has a cunning plan: gain control, or at least the neutrality, of the principality of Ferrara by marrying his sister Lucrezia to nominal enemy Prince Alfonso D’Este. Borgia needs a sly and capable agent to undertake this mission, and from a number of rivals he selects Captain Andrea Orsini (Tyrone Power) for the task. It’s clearly a test for Orsini, and if he succeeds, greater honor—and challenges—await. Along the way, Orsini thwarts an attempted murder, and then co-opts the assassin (Everett Sloane) into his own service. Because, according to the Borgias’ maxim, “The end justifies the means.”

This film succeeds brilliantly everywhere Castile failed, giving us a protagonist who is morally compromised but in command of his own destiny, who navigates the dangerous intrigues of Renaissance Italy and changes as a result of his choices. It’s one of Power’s most complex rôles, a solid performance, and Welles and Sloane are both great as well in their supporting parts; of the leads, only Wanda Hendrix, as love interest Madonna Camilla Verano, is a little bit out of her depth. Add in the fact that the movie is entirely shot in Italy at the historically-apt locations—Venice, Rome, Ferrara, et al.—and you have one of the finest depictions of Renaissance romance and intrigue ever put on film. Its sole flaw is that, due to a shortfall in its international funding, it was shot in black and white instead of the full color it deserved.

So, how is it as a swashbuckler? The movie’s all politics for the first hour, but then the swords come out of their sheaths, and they never go back. The siege and storming of the mountaintop fortress of Città del Monte is particularly stunning, as it’s staged, not at some phony walls on a Hollywood backlot, but on the actual medieval battlements on Monte Titano in San Marino. Shortly after Orsini’s climactic longsword duel on the tower stairs with Borgia’s henchman Don Esteban, it all wraps up with a thoroughly satisfying conclusion. Two stilettos up!