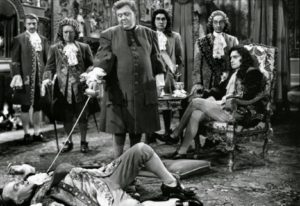 Charles Laughton had a strange career for a movie star. Enormously talented, with an outsized screen presence despite his modest stature, he made an early name for himself in the ‘30s playing big rôles like King Henry VIII, the Emperor Nero, and Captain Bligh. But no matter how talented he was, Laughton was far from conventionally handsome, and only grew more homely with time; this limited his options, and by the 1940s about the only lead parts he could get were in low-budget melodramas like Captain Kidd. Though theoretically based on the life of the historical pirate, other than a few names and some disconnected incidents, this movie has less to do with history than with touching on as many pirate-movie tropes as possible: rascally new crew members signing the Articles; the buccaneers burying their ill-gotten treasure in a hidden cave; a sword duel over possession of a captive lady; a candle burning down to set off a ship’s powder magazine; a medallion that reveals the wearer’s true parentage. All good fun, but this film’s principle pleasures come from watching Laughton’s portrayal of the supremely duplicitous William Kidd, who indulges in treachery, corruption, cruelty, and murder because he genuinely enjoys it, and revels in his utter lack of scruples. When he’s lying to someone he plans to betray (i.e., everyone), he can scarcely conceal his evil glee. At one point John Carradine calls him a cold-blooded shark, and he replies, “Ah, you flatterer!”

Speaking of the gaunt and ever-sinister John Carradine, he may be the best of the fine character actors supporting Laughton in this film, but he’s not the only one: there’s Gilbert Roland as another of Kidd’s lieutenants, the suave but avaricious Spaniard Lorenzo, the haughty Henry Daniell as King William III, and Reginald Owen as the snooty Shadwell, the butler employed by Kidd to teach him how to act like “a person of quality.” The one wrong note comes from the casting of Randolph Scott as Adam Mercy, the ex-pirate who joins Kidd’s crew as master gunner, but whose manners and attitude betray an aristocratic background. The problem is that Scott, a tall square-jawed American best known as a two-fisted cowboy in Western movies, is about as aristocratic as beer, and about as piratical as an Eagle Scout. As the king’s infiltrator in Kidd’s crew, it’s just unbelievable that Kidd and his cutthroats would be taken in by him for a moment. But this is Hollywood, so in the end cowboy virtue wins out over ruthless duplicity. At least Laughton gets in a mocking final speech.

Fun fact: according to Nikita Khrushchev’s memoirs, this was one of Josef Stalin’s favorite films. He’s said to have been delighted by Laughton’s portrayal of the unrepentant and utterly unprincipled pirate captain. Is good!