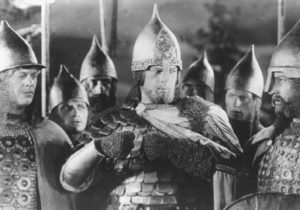 Alexander Nevsky is a towering achievement, an enduring classic of world cinema, except for the parts where it’s goofy and awful. Director Sergei Eisenstein, who’d made his name in the silent era with Battleship Potemkin (1925), had been trying ever since the advent of sound in film to get another movie made, but under the strictures of Stalin’s Russia it was nigh impossible. Finally, by selecting as subject a historical tale of Russian resistance to German aggression (Hitler was saber-rattling at Stalin), and by collaborating on the script with a Communist Party bigwig, Eisenstein was able to bring Nevsky to the screen.

It’s set in the 13th century, when the lands of the Kievan Rus, already plundered by the Mongols from the east, are beset by a new threat from the Teutonic Knights to the west. To counter the German assault, the boyars of Novgorod turn to the war hero who’d staved off the Swedes from the north, Prince Alexander Nevsky (Nikolai Cherkasov). From a story standpoint, this isn’t a complicated film: there’s the main, heroic plot, in which Alexander rallies the Russians to resist the heinous Germans, plus a goofy romantic subplot in which two cartoonish would-be heroes vie for the affections of a glorious Russian war maiden. But ignore all that and just look at this movie, because the matchless visuals are what we’re here for.

After a run-in with some Mongols from the Golden Horde—who look perfect—Alexander is off to Novgorod to start building a coalition to fight the Germans. The reconstruction of Novgorod is painstaking and beautiful: this is Old Russia, built of wood and earth and complete in every lovely detail. And the Germans are coming to destroy it.

Cut to the city of Pskov, newly conquered, and the Teutonic Knights, its conquerors. Here history has been augmented by art to depict a truly evil enemy. The knights are armored automatons, faceless and inhuman in their full helms, dealing death with cold, fanatical zeal. Even their foot soldiers’ heads are enveloped in coal-scuttle helms that deliberately evoke the helmets of the German Wehrmacht. Imperial Stormtroopers? Here’s where they come from, Star Wars fans. Only the knights’ robed and hooded priests have faces—but their visages are the cadaverous faces of vultures, Emperor Palpatine in the medieval flesh.

These Germans are bad. How bad are these Germans? They burn babies, and throw live children right into bonfires. That’s how bad.

On to the arousing-the-Russian-people-to-fight montage, and high time to mention the stirring orchestral and choral soundtrack by Sergei Prokofiev. Eisenstein worked closely with Prokofiev to fully integrate the music with the moving images. The director had distinct ideas about how to do this, because he’d been studying the recent revolutionary synchronization of music and film by its undisputed master: Walt Disney.

The last half of the movie is pretty much all medieval war and its aftermath, as Alexander maneuvers the Teutonic Knights into a final confrontation on the ice of frozen Lake Chudskoye. The climactic battle is justly famous for its setup and onset. The advance and charge of the Teutonic Knights established the look and feel for medieval warfare on film for everything to follow, from Laurence Olivier’s Henry V all the way to Peter Jackson’s Lord of the Rings. It must be said, this is one long-ass battle, but it’s organized into several clear and distinct phases, so the viewer never loses track of what’s going on. The goofy romantic rivals get too much screen time, and Prokofiev’s pursuit theme is shrill, frenetic, and overwrought, but the climax on the icy lake, as the surface cracks and disintegrates under the heavily-armored Germans, pays for all.

Victory, however, leads to deep melancholy and extended brooding over the carnage, because Russians. “I kiss your sightless eyes and caress your cold forehead,” the chorus sings. But at least the romantic subplot ends happily. (Duh.) There’s even a parade! Hats are waved, babies are kissed, and all is well again in Mother Russia.