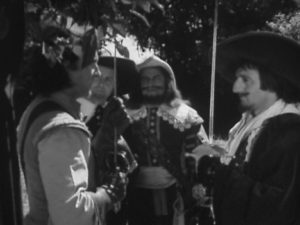 Over the opening title card, the Magnavox Theater announcer intones, “The Three Musketeers: the first full-length film made in Hollywood especially for television!” Magnavox Theater was a brief series of seven one-hour dramas broadcast in the fall of 1950, all of which were live TV except this episode, which was produced by Hal Roach Studios. These sort of early TV “prestige” productions were a lot like Classics Illustrated comic book adaptations—earnest and well-meaning, but stiff, flat, and awkwardly abridged. The abridgement here consists of throwing out nearly everything in the novel except the duel between the musketeers and the Cardinal’s Guards, Buckingham’s secret visit to the queen, and the gauntlet d’Artagnan and the musketeers must ride to Calais to recover the diamond studs, with narration by Athos to fill in the gaps. Production values are better than usual for 1950 television—that is, just two notches above terrible. For once, Porthos is well cast, played here by Mel Archer, a giant of a man with a booming voice, but the rest of the actors are forgettable. For Dumas completists only.