Prince Who was a Thief 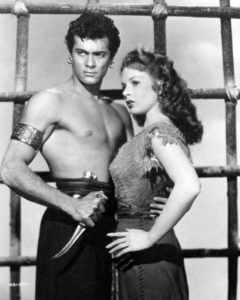 This is the first of many sword-swinging starring rôles for Tony Curtis, whom you really can’t avoid if you’re watching historical adventures made in the ‘50s. Everybody mocks Curtis, and it’s mostly deserved, because he just doesn’t have the wits of a Burt Lancaster, or even a Louis Hayward, but he’s not terrible so much as just mediocre. Somebody was persuaded, and persuaded him, that he was movie star material, and it took Hollywood about ten years to figure out that he was best employed as a reliable second banana. Fortunately he’s offset in this film by engaging performances from Everett Sloane and from Piper Laurie, who even this early in her career knew exactly what she was doing.

As in The Prince of Foxes, Sloane excels playing a thief and assassin, though here with a comic touch he didn’t get a chance to show in the earlier film. Hired to kill the infant Dey of Tangier so the child’s wicked uncle can assume the throne, when the time comes he can’t do it, so he fakes the murder and takes the child to raise as his own. As in all these tales of a rightful monarch raised by someone else, we know how it’s going to end, so the pleasures or disappointments come in the getting from here to there. This time the trip is mostly worthwhile. The boy grows up to become Julna (Tony Curtis), the city’s greatest thief, who is fixated on its greatest prize, the treasury vault where the false dey stores the gold his tax collectors wrest from the people. The business of thieving gets a proper workout in this movie, and Julna’s exploits evoke the young Conan the Barbarian, or a Dungeons & Dragons rogue. The whole thing is shot on soundstages, with no exteriors at all, just the ever-dark city streets and the moody lamp-lit interiors that surround and tower over them.

In proper Thief of Bagdad fashion, while escaping some guards Julna goes where he shouldn’t and casts his eyes on forbidden fruit, his beautiful cousin the Princess Yasmin (Peggie Castle). The thief is smitten with the snotty princess, but as soon as he cute-meets another thief, Tina (Piper Laurie), during a bungled jewel robbery, we know she’s really the one for him. The barely-legal Laurie, as slippery as an eel and as cute as two bugs, is a wide-eyed naïf who speaks of herself in the third person like an Elder Scrolls Khajiit, and is just as adorably avaricious. Lissome and energetic, she effortlessly matches Curtis’s considerable athleticism, usually while squealing with glee. She’s a delight.

Though based on a story by Theodore Dreiser, of all people, the plot is standard-issue claptrap, with mistaken identities, intrigue in the dey’s court, and an egg-sized pearl the possession of which is the key to marrying the snotty princess. There are several unnecessary scenes of “oriental” dancing by scantily-clad women, but to be fair there’s also a lot of gratuitous swimming by the bare-chested Curtis. There are gags interspersed between the thefts and pursuits, but about half of them fall flat, often because they rely on labored locutions such as, “Begone, you sons of she-camels!” Still, the scene where the thieves use geese as projectiles is charming. In the end, Julna is revealed as the Rightful Dey—he has a tattoo AND a scar, to make doubly sure—the snotty princess is packed off, and Tina is forced to take a bath so she can be properly married. Ending in a marriage: in classical terms, that’s what makes it a comedy, right?