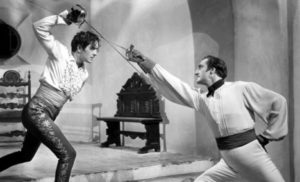 Tyrone Power’s family had been on the stage for generations, and he considered himself a serious actor. He finally broke into the movies in the mid-1930s and became a popular leading man for 20th Century Fox in parts both serious and not-so-serious. Meanwhile Warner Bros. was making a pile from Errol Flynn’s swashbucklers; though Fox didn’t have Flynn, they did have Power, and Darryl F. Zanuck decided Power was going to be Fox’s sword-slinging hero. To launch him in that new rôle they chose to remake The Mark of Zorro, the film that had launched Douglas Fairbanks, Sr.’s swashbuckling career. It wasn’t the kind of part Power really wanted to play, but he dutifully agreed, and the result was a classic that typecast him, rightly or wrongly, for the rest of his career.

This new Mark of Zorro was no slavish remake: the screenwriters rewrote the story from top to bottom, retaining its familiar and iconic elements, but adding new ones, such as naming the ruler of colonial Los Angeles the “Alcalde,” a title that became standard thereafter. But first they tacked on a prologue, showing Don Diego as a cadet in the hussars in Madrid, romancing the ladies and dueling the other hot-bloods. Then his father summons him back to California, where there’s no one at all to fight—so he abandons his sword by thrusting it into the ceiling (a nice callback to Fairbanks, who did the same thing at the end of his Mark of Zorro).

However, California is not the peaceful backwater Diego remembers. His father, the Alcalde, is Alcalde no more, forced out and replaced by the brutal Don Luis Quintero, who runs Los Angeles as a private fief for the enrichment of himself and his enforcer, Capitan Esteban. But it’s not all bad, for the new Alcalde has a sweet, clever, and beautiful niece named Lolita.

Meanwhile, the peons are taxed into destitution, those who can’t pay are whipped, and even the sanctuary of the church is violated—so Zorro must ride! And it turns out Power is tailor-made for the part: he’s dashing, romantic, and swordsman enough for the rôle of Zorro, and he has the sly comic touch needed to play the effete fop Don Diego. In this sort of film the hero is key, of course, but all the best swashbucklers feature a top-notch supporting cast, and this is no exception. To help launch their rival to Errol Flynn, Zanuck cannily hired two of the standouts from The Adventures of Robin Hood, namely Basil Rathbone for the rôle of the arrogant Capitan Esteban, and Eugene Pallette to play Fray Felipe, who is essentially Friar Tuck transported from Old England to New Spain. Linda Darnell also does fine as the dewy love interest Lolita, but the prize goes to Gale Sondergaard arching her astounding eyebrows as Inez Quintero, the Alcalde’s lascivious wife, who’s set her sights on Don Diego. She’s just delicious.

The two best scenes in this film are polar opposites: the first where Power and Darnell bandy words as Zorro, disguised as a monk, flatters the gradually-catching-on Lolita; and the second is nearly the last, when Power and Rathbone cross swords for the final duel. It’s exciting, and even better, it’s convincing: “Tyrone,” said Basil Rathbone, “could have fenced Errol Flynn into a cocked hat.”