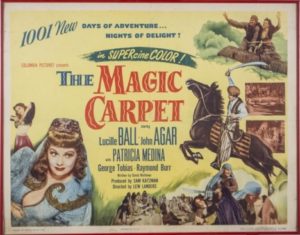 This is quite terrible. In a cheesier-than-usual Arabian palace set, the Good Caliph is just naming his newborn son his sole heir when he’s assassinated by the New Evil Caliph. The nurse escapes with the child and sends him flying away on a magic carpet. (This is the only fantasy element in the film and is completely unexplained, because Mysterious East or something.) The child is taken to a doctor, who hides the carpet and decides to raise the child as his own, not telling him that he’s the Rightful Caliph. The child grows up to be legendarily-bad leading man John Agar, who has all the screen presence and charisma of an Idaho potato. There’s a guards-oppressing-the-people montage; Agar, now called Dr. Ramoth, sees some oppressing and says some lines to show he disapproves, thought that’s the only way you can tell because his face doesn’t change. To fight the Evil Caliph’s oppression Dr. Ramoth becomes the Scarlet, or maybe Crimson Falcon, and leads a band of freedom fighters in a freedom-fighting montage. He keeps raiding the wrong caravans that don’t have the weapons he needs to arm the people to overthrow the Evil Caliph, so Agar decides he needs to infiltrate the palace to get inside information. His cunning plan is to kill a bunch of palace guards so he can get his comic sidekick inside, where he can take the place of the Evil Caliph’s wine taster and dose him with a permanent-hiccups potion. Nobody pays any attention to the dead guards, because there are plenty of them, so Dr. Ramoth cures the Evil Caliph of permanent hiccups and becomes the new palace physician.

Yeah. Now that he’s inside the palace Agar meets the Evil Caliph’s Evil Sister, who is played by, I am not making this up, Lucille Ball. With her red hair and green eyes she’s about as Arabian as a leprechaun, but I suppose what matters is that she wears harem pants and a midriff-exposing top like the, I guess the word is bevy of giggling starlets prancing around the palace and its blue plastic in-ground pool. Cast as a seductive villainess, Ball’s talents are completely wasted as she never does anything the least bit funny or, for that matter, seductive or villainous. More stuff happens: Agar finds out he’s the Rightful Caliph and flies around on his carpet, the effects for which are so awful they’re almost endearing. There’s a bunch of “swordplay,” with lots of people waving around thin curved sticks that are supposed to represent scimitars, but confusingly there are always some guys waving actual sticks because I guess the props department didn’t make enough scimitars. Also, everybody knows that when you run someone through you pass the sword behind their body, but Raymond Burr didn’t get the memo and stabs people on the wrong side. Oh, right, he’s in this too, as the Evil Caliph’s Evil Grand Vizier, wearing black facial hair that must be pretty stiff because his lips barely move when he speaks. Only his eyes look alive, the eyes of trapped animal shifting this way and that, desperately seeking an escape.