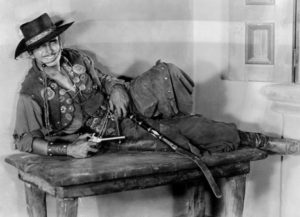 The Gaucho was a very different swashbuckler for Douglas Fairbanks, Sr. In his mid-forties by the time he made this film, he could no longer convincingly play the endearingly earnest youthful hero, and besides, such rôles were increasingly passé. By the late ‘20s the vogue was for darker and more openly erotic characters as exemplified by Rudolf Valentino and John Barrymore, the latter of whom had openly challenged Fairbanks on his own turf with Don Juan and The Beloved Rogue. Perhaps it was time for Fairbanks to take a turn as a dangerous Latin lover. At any rate, this seems to have been the thinking behind The Gaucho, in which the hero is a mocking, womanizing, hard-drinking, chain-smoking, bolas-swinging outlaw, a bandit chief known only as—you guessed it—“The Gaucho.” He and his gang come across the Andes and swarm into a mountain town, where the Gaucho finds an ardent young admirer in a fiery local woman, who cuts out a rival by doing a torrid tango with the Gaucho while bound tightly to him by his bolas. This “Mountain Girl” (the only name she’s given) is played with hot salsa by Lupe Velez, better known later in her career as “The Mexican Spitfire,” here in her American film debut.

Meanwhile, a South American comic-opera tyrant named Ruiz has sent his troops to occupy the City of the Miracle, a town built around a holy shrine, to confiscate the wealth brought there by pilgrims, and enslave the poor peasants who depend on the shrine’s generosity. However, the Gaucho has come over the mountains to take that wealth for himself. The bandit chief, disguised in a captured Ruiz trooper uniform, sneaks into the occupied city to scout it out. He reveals himself to test the troops, and a stunt-studded pursuit ensues. After half a dozen films you’d think we’d have seen every aerial trick Douglas Fairbanks could perform, but no—he continues to astound, still doing all his own stunts.

By means of a clever stratagem the Gaucho’s bandits take the city, but when he goes to loot the shrine he meets its beatific holy-virgin-nun-lady, and for the first time feels the power of purity and sanctity. But the Mountain Girl is jealous, the shrine’s loot is in play, Ruiz is on the march, and the pot is soon bubbling over with passion, envy, treachery, and betrayal. The morality play that follows doesn’t go quite the way you might expect, and though the religious aspect gets a bit mawkish, there are some clever twists and turns before it ultimately resolves for the best. (Hey, rogue hero or no, it is still a Doug Fairbanks swashbuckler.)

Interestingly, here we are at almost the end of the silent era, and yet this story—written by Fairbanks, by the way—is told almost entirely with visuals, and sometimes many minutes pass between one cue card and the next. But with this master at the height of his cinematic game, you truly don’t miss the words. Happy discovery: Lupe Velez fights and rides as well as she dances!