Flame and the Arrow 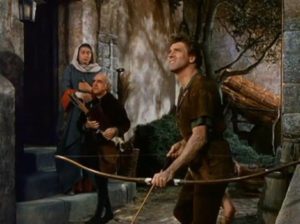 Here’s an overlooked gem, or at least a semi-precious stone. It’s set in northern Italy in the 12th century, when the mountains of Lombardy were occupied by the Germans of Holy Roman Emperor Frederick Barbarossa. A mountain town ruled by the brutal Count Ulrich of Hesse, known as the Hawk (Frank Allenby), is thrilled by the return of its favorite son, the carefree hunter and crack archer Dardo (Burt Lancaster). The townspeople try to persuade Dardo to join their plans to resist the Hessians, but Dardo says he depends on no one but himself, and says he’s “not out to right anybody’s wrongs but my own.” Well, we know he won’t be singing that selfish tune for long when collective action is called for, especially since this film is written by Waldo Salt, who’s about to be blacklisted in the imminent McCarthy era when he refuses to testify before the House Un-American Activities Committee. Time to join the revolution, Comrade Dardo!

The personal wrong that Dardo’s out to right is that he has a five-year-old son, Rudi, whom he’s raising alone because his wife left him to become the Hawk’s mistress. After Dardo, for the doubtful benefit of Rudi, publicly humiliates his mother in front of the Hawk, Count Ulrich decides to take Rudi by force into the castle and raise him as a Hessian. And thus begins the cycle of kidnappings, raids, and escapes that make up the action of the rest of the picture, as Dardo comes to assume the leadership of the anti-Hessian resistance.

The script is quite good, sharp without ever getting too dark, and with some clever byplay that almost justifies the romance between Dardo and the Hawk’s niece Lady Anne (Virginia Mayo), whom Dardo kidnaps in a bid to trade her for Rudi. Lancaster rules the screen with his infectious grin and the twinkle in his eye, and he’s an even more athletic swashbuckler than his obvious model, Douglas Fairbanks, Sr., because he performs his lithe acrobatics with a virile muscularity Doug Sr. couldn’t match. The director’s chair is capably filled by Jacques Tourneur, who keeps things light, bright, and quick until the final confrontation in a darkened castle hall, staged with some of his signature moody lighting and artistic angles. Top it off with a score by Max Steiner, and you’ve got a very satisfying ninety minutes.