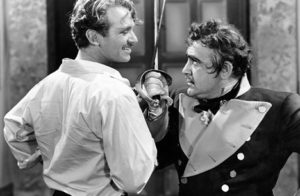 Producer Edward Small returns with another swashbuckler based on a story by Alexandre Dumas, as he was on an annual basis at this point (though the run was about to be interrupted by World War II). Louis Hayward, Small’s usual star, was slated for the lead, but he took a part in a prestige drama instead, so the dual rôle of the Corsican twins instead went to Douglas Fairbanks, Jr., who delivered one of his best performances.

In old Corsica, two aristocratic families have been feuding for generations, the noble Franchis and the cruel and coarse Colonnas. The Franchi family is gathered at their estate to await the birth of an heir to the count, an event the Colonnas take advantage of to attack and massacre the Franchis. Countess Franchi gives birth to conjoined, or Siamese, twins, but in the chaos of the Colonna attack they are spirited away by the family doctor (secret passage!). Doctor Paoli successfully separates the twins, and names them Lucien and Mario. Baron Colonna is aware that Countess Franchi gave birth to twins, so to put him off the trail, Mario is sent with noble family friends to be raised in Paris, while Lucien remains in Corsica, raised by a Franchi retainer among a gang of bandits. But the twins share a psychic connection, and what one feels, the other feels as well. When the brothers come of age, Dr. Paoli summons Mario back to Corsica, to meet Lucien and to tell them of their true parentage. The twins embrace and swear vengeance upon Count Colonna. “No one knows there are two of us,” says Lucien. “It’ll be our sharpest weapon!”

So much for the first half hour, which sets up the story. Now comes the fun: the conflict with the Colonnas, led by Akim Tamiroff as the baron, and the conflict between the brothers, who fall in love with the same woman, Lady Isabelle Gravini—who is also, of course, desired by Baron Colonna. Besides genre-convention bingo (Villain’s jealous mistress! Fop impersonation! Death-feigning potion!), the main pleasures here are in the performances of the two male leads. Fairbanks really puts it over in his double rôle as the noble Mario and the tormented and jealous Lucien. In both parts he gets in some fine active swashbuckling reminiscent of his father. And Tamiroff’s Baron Colonna is a delightful mix of wily cunning, brutal bullying, and vain preening. Menacing one moment, laughing the next, he’s a complete hoot. When the Franchi brothers raid his holdings, he’s outraged: “First my cousins, then my nephews,” he cries, “and then my sheep!”

But in the end it all works out, with Doctor Paoli’s help—because science! The final sword fight between Franchi and Colonna was Doug Fairbanks, Jr.’s favorite of his entire career.