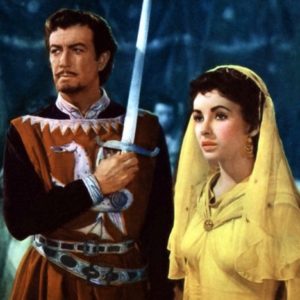 In 1814 the poet Walter Scott began publishing his Waverly novels of recent Scottish history, before switching, with Ivanhoe in 1820, to the Medieval era and the history of England, co-inventing (along with Jane Porter) the modern genre of the historical adventure novel in the process. Ivanhoe was a landmark in other ways as well, for its sympathetic treatment of Jews in Western societies, for establishing the character and tone of our modern version of Robin Hood, and for promoting the Medieval background as a setting for adventure tales, still as popular today in the 21st century as Scott made them in the 19th. (That’s right: no Ivanhoe, no Game of Thrones.)

This blockbuster 1952 MGM film was also something of a landmark: its success made movies of knights in shining armor a Hollywood staple for years to come, it brought Scott’s sympathy for the plight of the Jews undimmed to the big screen, and it launched Elizabeth Taylor to the heights of stardom. Its titular hero, however, is another Taylor, Robert, in the rôle of Sir Wilfred of Ivanhoe, a knight in the service of King Richard the Lion-Hearted newly returned from the Crusades. Richard has been imprisoned by Leopold of Austria, and Ivanhoe has vowed to raise the money for his ransom, and to fight for the Saxons against Prince John and Norman oppression while he’s at it. As if that weren’t enough, he also wants to marry the Lady Rowena (Joan Fontaine), but to do that he’ll have to regain the lost favor of his fierce Saxon father, Sir Cedric (Finlay Currie, with an amazing head of hair). To do all this Ivanhoe must win the Big Tournament, but he can’t enter without money to buy horse and gear—which is how he meets Rebecca (Elizabeth Taylor), the daughter of a moneylender. Do sparks fly? Yes, they do.

Of course, a hero is only as good as his villains, and Ivanhoe has some dangerous foes in Prince John (the wolfish, sneering Guy Rolfe) and the foremost of the Norman knights, the arrogant Bois-Guilbert—played by George Sanders, and now you know we’re in for a good time! The movie was filmed in and among the castles of Scotland, so the scenery is fabulous, and the castle interiors are properly cramped, stony, and asymmetrical. Some of the weapons are wrong for the period, but the knights’ armor is right, suits and coifs of chainmail rather than the plate armor of later times. The film is bookended by two knightly tournament scenes, both classic in their way, but they’re outdone in the middle by the exciting siege and assault on a castle, when the Saxons, led by Robin Hood (Harold Warrender), finally rise against the Normans. If you’ve ever looked at a Medieval castle and wondered how the devil attackers could get across a moat and up a sheer wall in the face of bolts and boulders, Ivanhoe shows you how.

The movie’s not without flaws: except for a few weak jokes from Wamba, Ivanhoe’s jester-turned-squire, it’s a humorless affair, and here and there it drags a bit. Robert Taylor looks the part but his acting is rather dry and stiff, and the same can be said of Joan Fontaine. Of the leads in the love triangle, only Elizabeth Taylor as Rebecca the Jewess really shines, almost literally; when she’s onscreen you can’t look away. And it’s not just because she’s stunning, she’s also far and away the best actor in the picture. Only Sanders comes close: after Bois-Guilbert loses his black villain’s heart at first sight of Rebecca, he’s conflicted at every turn, and never sure of himself again. Additional kudos must be paid to Felix Aylmer for his fine performance as the Jewish patriarch Isaac, and to Miklós Rósza for the rousing score, one of his best. A whole series of Medieval movie epics will follow in the wake of Ivanhoe, but few will be as good.