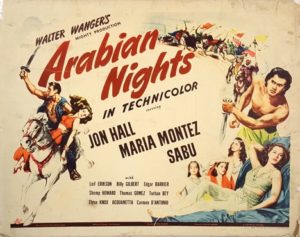 In the 1940s Universal was a modest-sized studio whose business was cranking out low-budget adventure pictures in every genre. After he starred in the 1940 British Thief of Bagdad, Indian teen star Sabu moved to Hollywood and signed a contract with Universal. They cast him in some jungle adventures, but also decided to try him in their own Arabian Nights fantasy, titled, er, Arabian Nights. The studio splurged on fancy costumes, big sets, and shot it all in Technicolor, but relied on their usual stable of B- and C-listers to round out the cast.

The movie’s title notwithstanding, it doesn’t seem like anyone involved with this story read The Arabian Nights’ Entertainment beyond the list of characters, cherry-picking the ones that sounded familiar. Haroun-al-Raschid (Jon Hall), Caliph of Bagdad, is betrayed by his Grand Vizier in favor of his evil half-brother, Kamar, who is determined to steal the throne because it’s the only way he can win the love of the ambitious dancing girl Sherazade (Maria Montez). Yeah, that’s how dumb this is. Sherazade is part of a troupe of “humorous” traveling entertainers that includes an acrobat, Ali (Sabu), a doofus named Aladdin whose shtick is always searching for his lost lamp, and another doofus who tells boring sea stories and goes by the name Sinbad (Shemp Howard!, wearing brownface). Haroun, wounded in the vizier’s coup but saved by Ali and disguised (they shave him), falls in with this troupe; Haroun and Sherazade make eyes at each other, guards with scimitars appear, and gags and pursuits ensue.

So evil Kamar openly wants the throne and the love of Sherazade; the evil vizier secretly wants the throne and the love of Sherazade; disguised caliph Haroun wants the throne and … well, you get it. Despite the references to magic lamps, it’s a conventional dynastic struggle with no fantasy elements to it, unless you count the male fantasy in which Ali hides among the caliph’s scantily-clad harem girls while two of them distract the eunuch guards with a hair-pulling cat-fight. (Yup.) We get ornery camels, and shiny turbans, and scenic sand dunes, but the story doesn’t make a lick of sense, the acting is uniformly terrible, and all the scimitar-clashing fights are at the level of community-theater stage combat. So naturally it was a big hit, and henceforth Hollywood had a new ongoing adventure genre, the Arabian Fantasy. Allah preserve us.